Book Online
Get a Quote

It’s an Unfortunate Fact: Home invasions are on the increase.

The Ultra-Safe wireless driveway alarm will alert you as soon as an intruder sets foot on your property, not when he’s INSIDE your home like traditional alarm systems

"What is the Ultra-Safe system and how does it work?"

It uses one or more battery-powered Outdoor Detectors and a portable Base Station that is located inside your home. The base station sounds an alert tone if an intruder is detected outside.

Unlike older technology outdoor sensors, the Ultra-Safe will not false alarm due to  animals, wind, and leaves (provided the simple installation guidelines are followed) so you can sleep safe and sound knowing that you’ll only be alerted if an intruder is approaching

"An Alert Tone?
What Good Is That?"

You have taken away the intruder’s best weapon….

…..the  element of SURPRISE!

You know he’s on your property

And he is still outside!

Awake, alert and able to assess the danger and make an appropriate response. 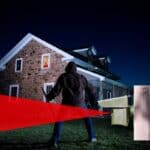 The intruder approaches your home.

He forces a window and stealthily makes his way inside trying to make as little noise as possible.

Maybe he opens a squeaky door or bumps into a chair…would you wake up?

Even if you were to wake up, then what? Do you get up and grab a weapon to investigate?

No matter what happens next, the fact is you only became aware of the intruder…

…. after he had entered your home!

It’s a frightening prospect, but one that’s happening more frequently.

Even if you have an alarm system it won’t trigger until the intruder is INSIDE YOUR HOME!

The intruder has the advantage!

Ultra-Safe is your eyes and ears when you're sleeping

The driveway alarm’s Base Station will alert you if someone is prowling around outside. Low cost and effective way to protect way to protect:

The Ultra-Safe wireless driveway alarm system is available as a DIY kit or if you live in Melbourne metro area we can send our qualified installer to do it for you for just $135.00

Anyone can have a fully functional up and running in around 15 minutes
.

Follow the simple guidelines and you'll never have a false alarm!

The Ultra-Safe Wireless Alarm is simple to install. It comes with a detailed instruction manual in plain English.

You’ll also have access to our installation videos that show how to set the system up.

The system comes with our 30 day money-back guarantee.

Speak to an alarm expert 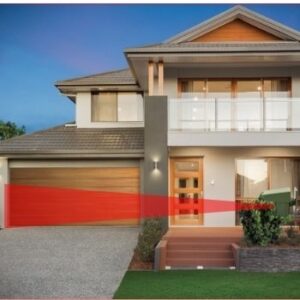 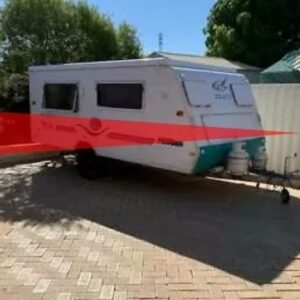 Protect Your Caravan, Boat or Jetski 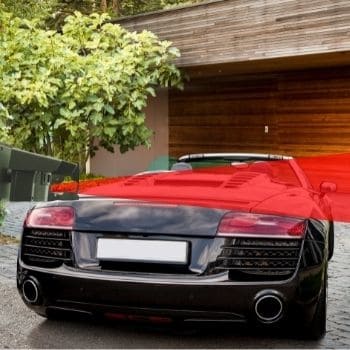 Be alerted if someone approached your car while you sleep 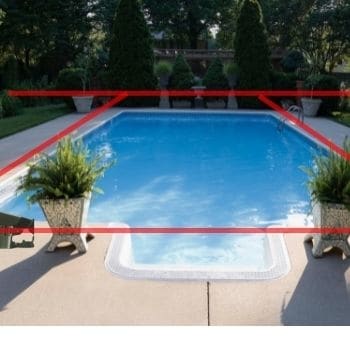 Create a safety zone around your swimming pool 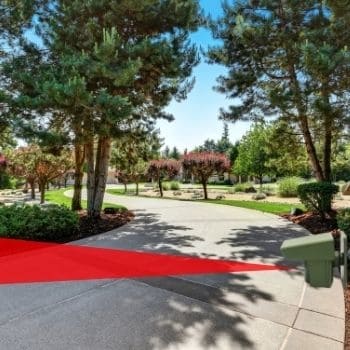 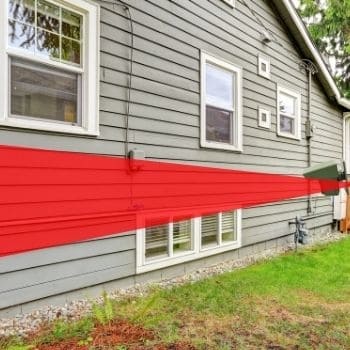 Receive an alert if an intruder is snooping around your home

Mount the outdoor detector exactly where you need it. Runs on 4 x "AA" batteries. Around 2 year battery life 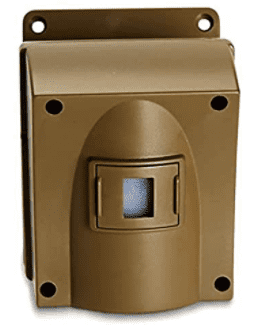 We'll show you exactly how to set the outdoor detector up to protect your areas of concern. Active filters prevent false alarms 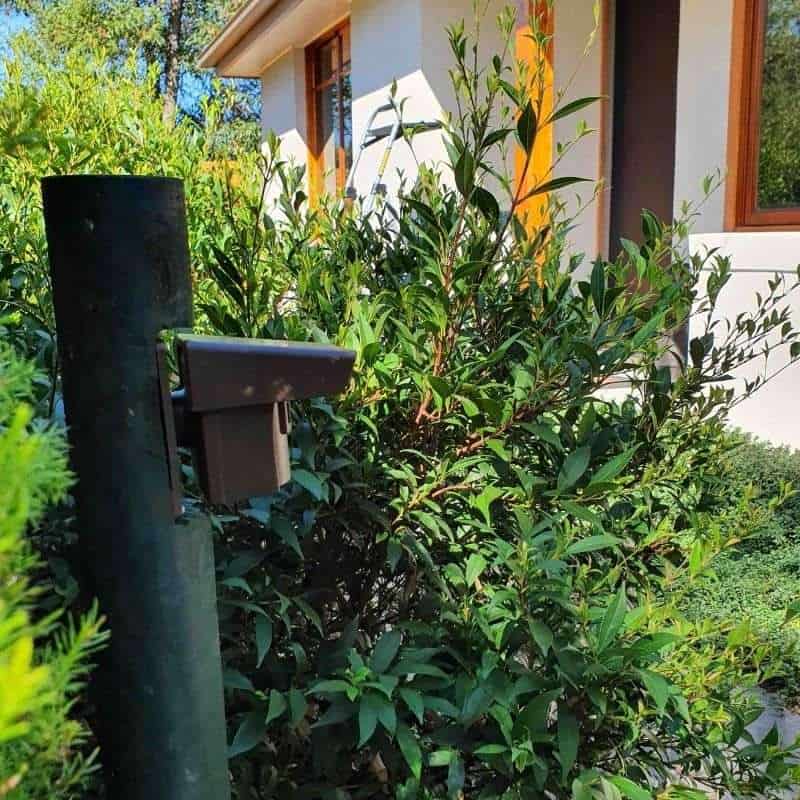 Program Your outdoor sensors into different zones The Zone light flashes to show you where the intruder is. Add up to 4 sensors per zone

Set volume for LOUD during the day to hear visitors approaching. Reduce volume at night for effective early warning of an intruder 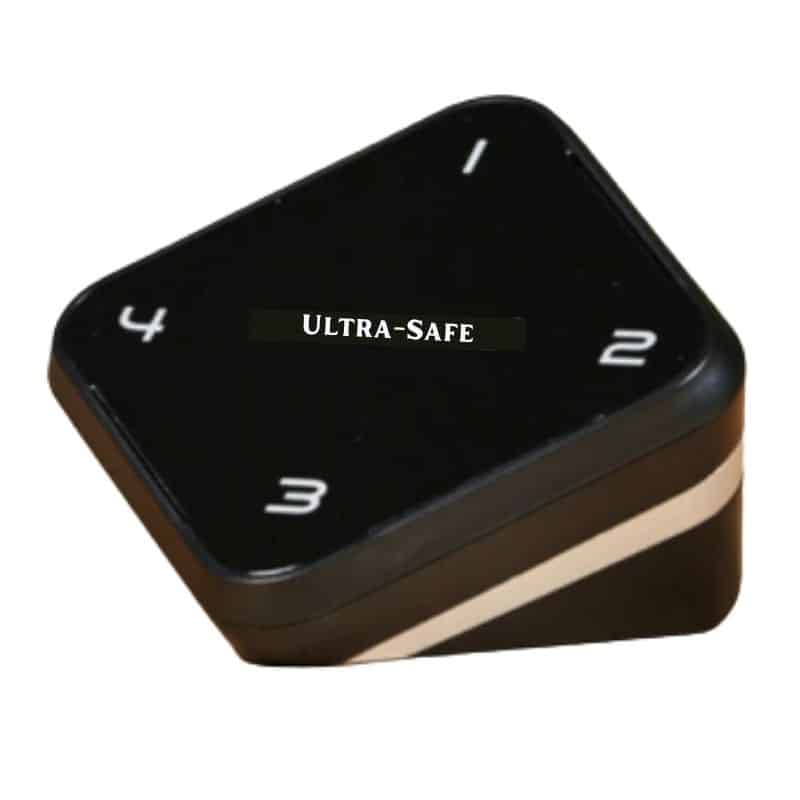 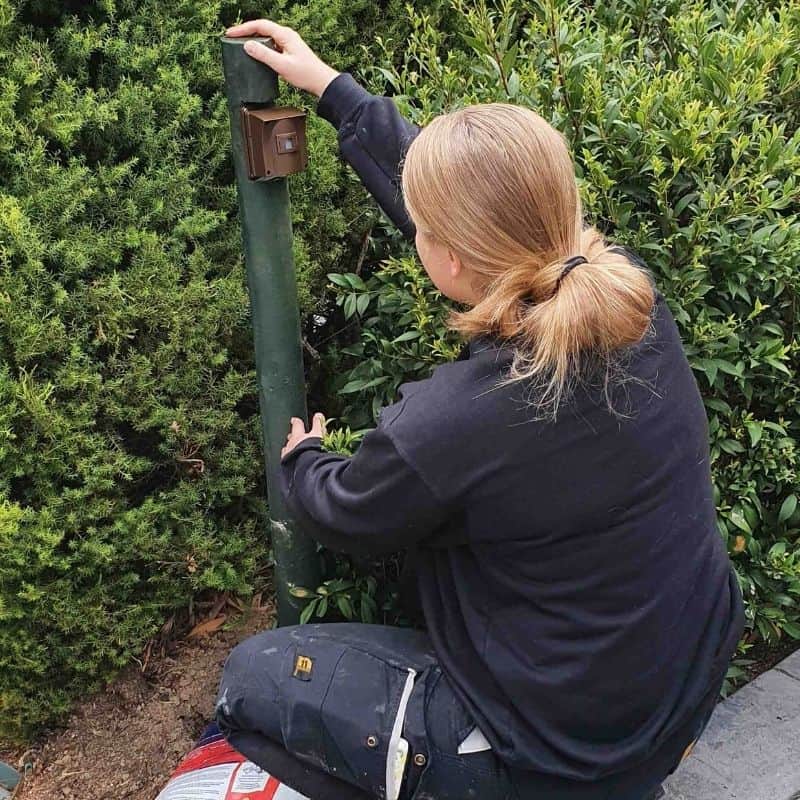 1.Mount the Outdoor Sensor to a firm surface. A tree, fence post or wall is perfect. 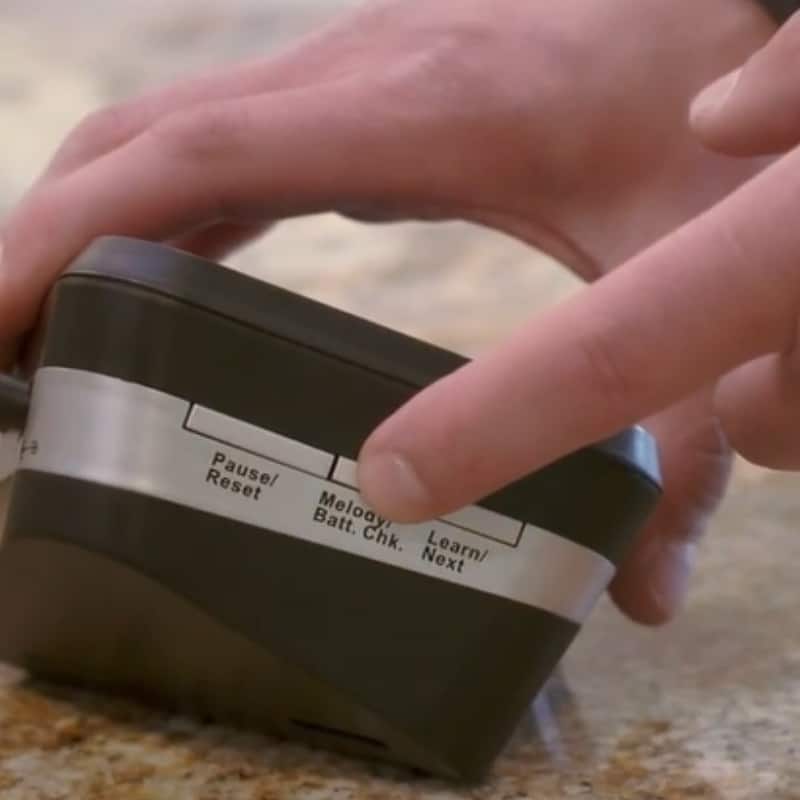 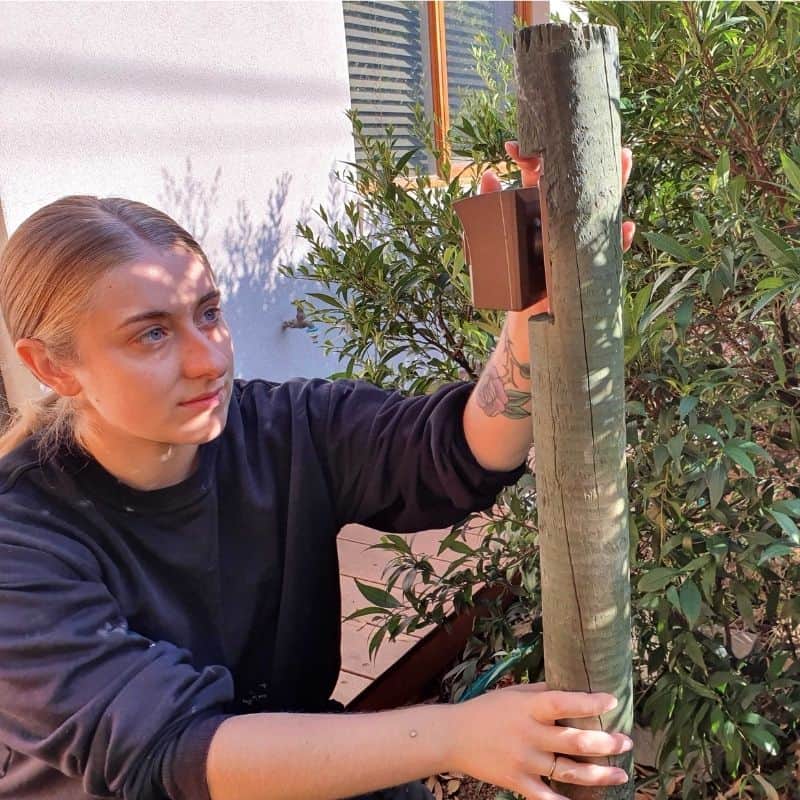 Perform a simple 'Walk-Test' to ensure the area to be protected is covered. Adjust as neccesary 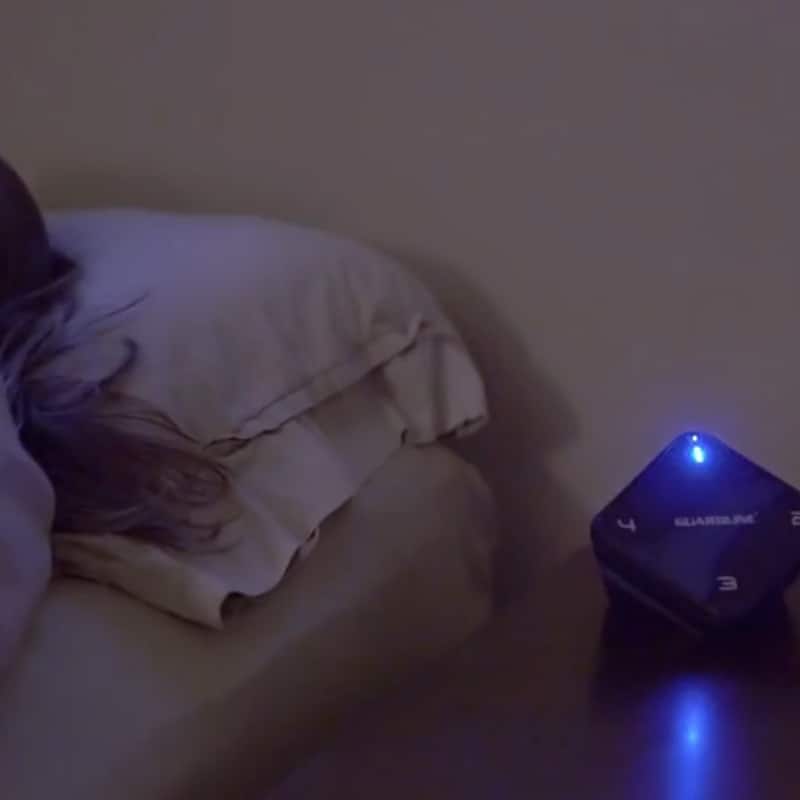 Relax! The Base Station will alert you if an intruder is detected on your property. A detailed instruction manual is supplied with every system

but it doesn’t stop there.

Extra deterrents and enhancements can be added to turn your home into a fortress! 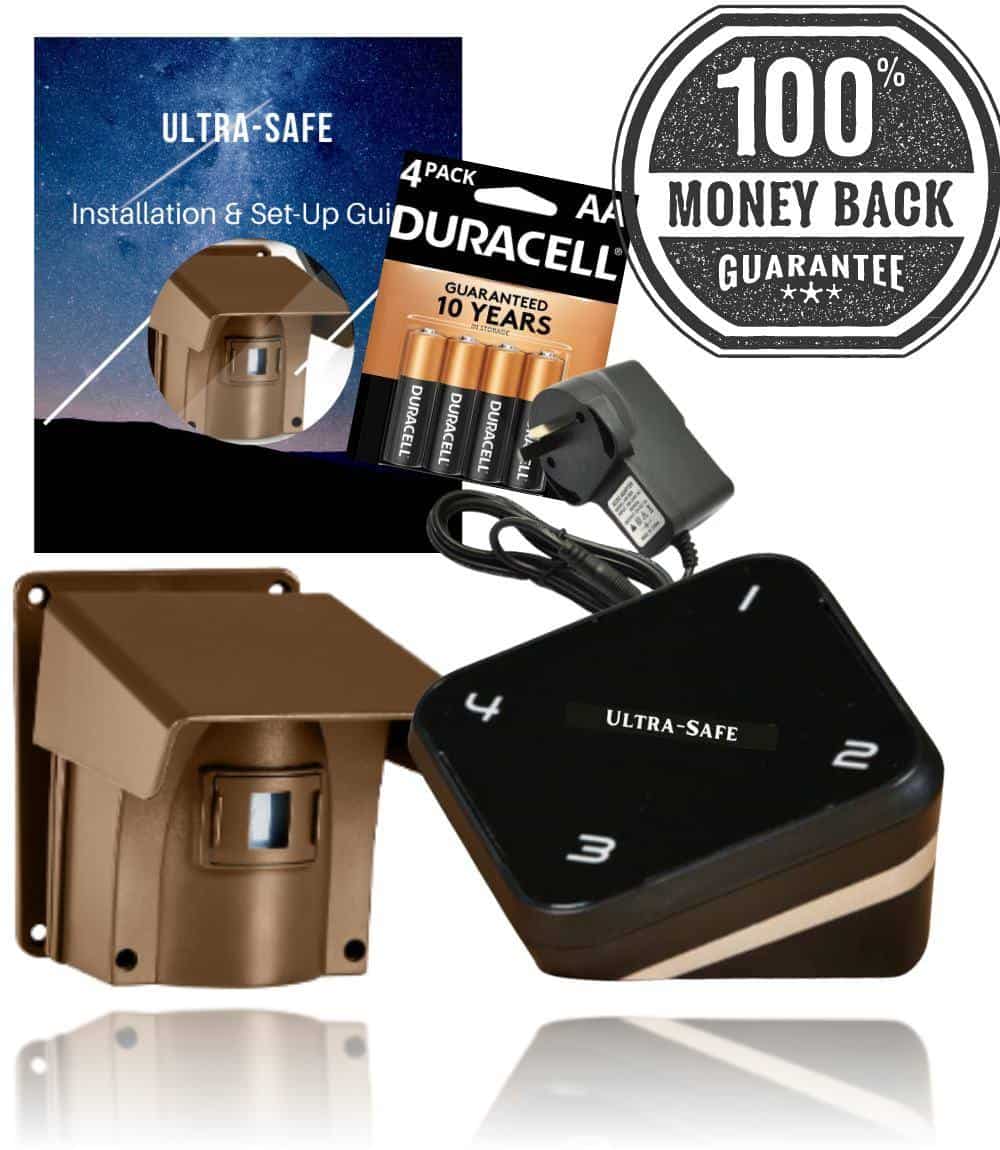 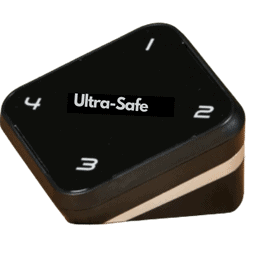 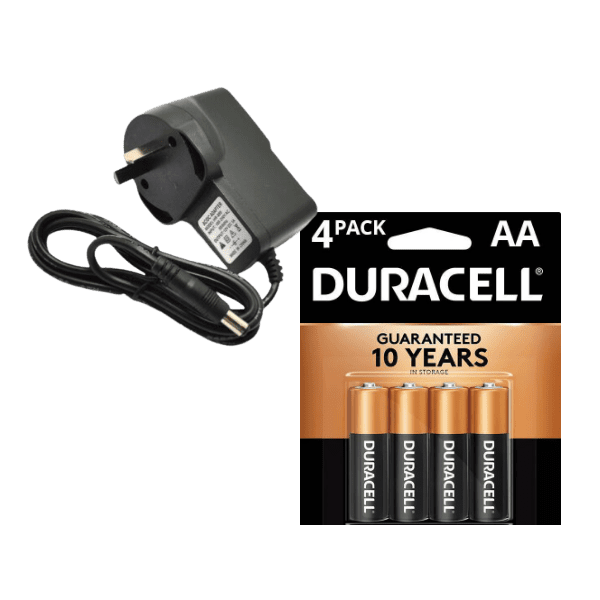 Nothing else to buy. Have your system up and running in 15 minutes. 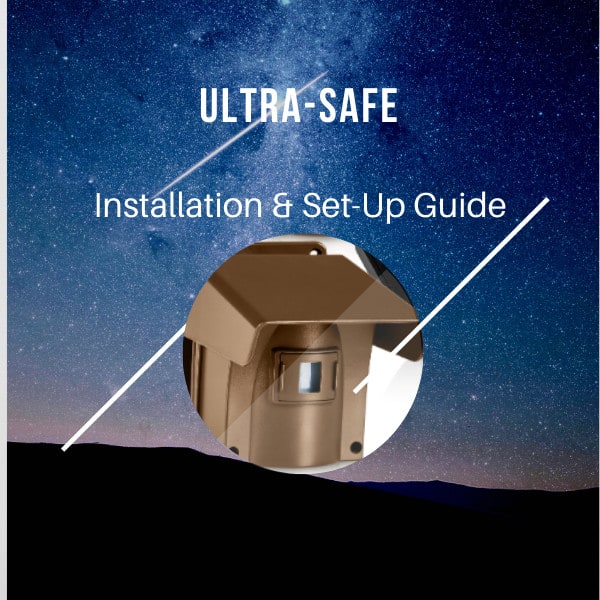 This is a proper, detailed guide to the installation and setup of your Ultra-Safe perimeter alarm system. It is not a flimsy one-page “Quick Start Guide” 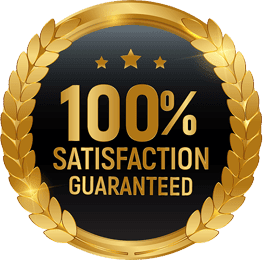 YOUR PURCHASE IS BACKED BY OUR
UNCONDITIONAL MONEY BACK GUARANTEE
Before I buy anything, I like to know that the goods are backed by a solid money-back guarantee.
And I want you to be comfortable with this purchase.
So, if you decide for any reason (or for no reason at all) that your Melbourne Alarms system (alarms, cameras, intercoms – or anything we’ve installed for you) isn’t a perfect fit for you let us know within 30 days
We’ll remove the system and promptly return every cent you’ve paid – no questions asked..
Just send us an email to steve@melbournealarms to request a refund within 30 days. 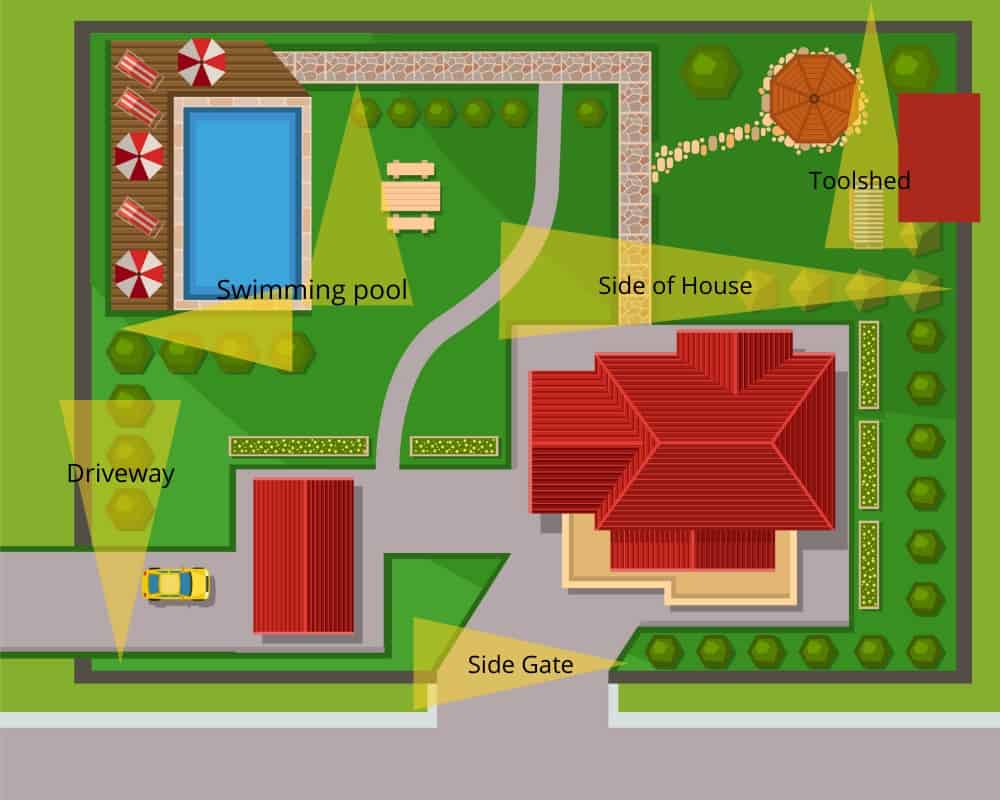 " I now sleep better at night knowing that I have my bedroom windows monitored at night. As a bonus it also lets me know when visitors arrive at my front door 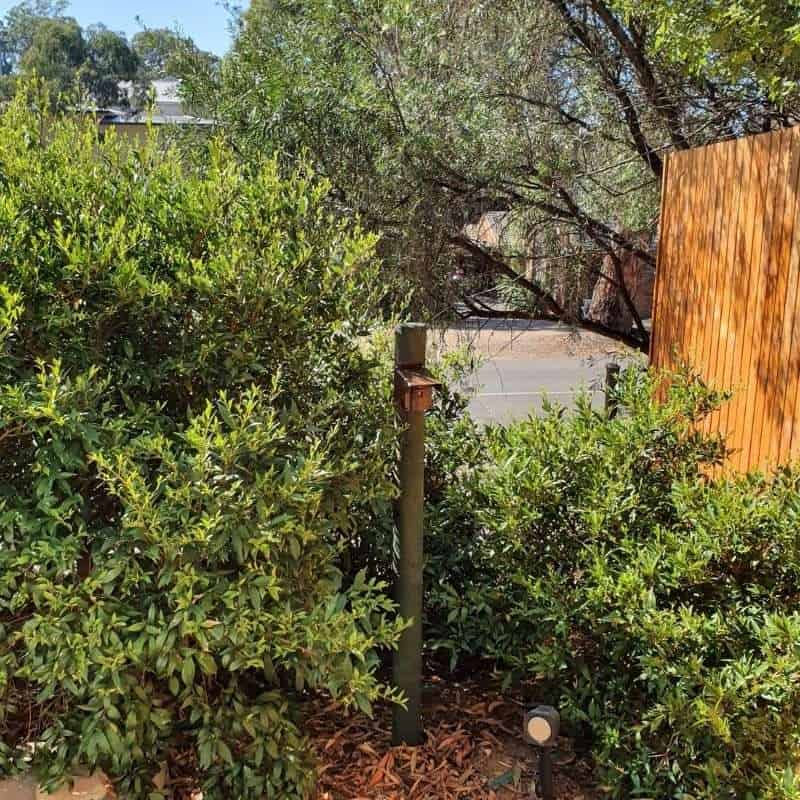 How Long is the 'Invisible Tripwire' from the Outdoor Sensor?

The Outdoor Sensor can detect an intruder 15 metres away. The wireless range between the outdoor sensor and the base station is 150 metres (line of site).

How long does the system take to install?

A system with 1 x Base Station and 1 x Outdoor sensor can be installed and set up in about 15 minutes.

The system comes with a user manual so set up is simple. And you can always send us an email if you have any questions regarding set up.

How is the system powered?

The Outdoor Sensor runs for around 2 years on 4 x ‘AA’ batteries.

The batteries are included.

The Base Station plugs into any standard power point.

It can also run from 4 x ‘AAA’ batteries if required, so it can be completely portable.

These batteries are not included.

Are any special tools needed to install the system?

A screwdriver is needed to screw the Outdoor Sensor to a tree, post or wherever you choose to mount it.

You may need an electric drill and a small (3mm)  drill-bit if you’ll be screwing into hardwood or similar.

You’ll need a hammer drill if you want to mount the sensor on a brick or concrete wall.

How Do I Connect Other Devices Such as Sirens to the System?

The Base Station has 2 outputs:

1 – a change-over relay with dry contacts

2 – an output that switches to 12 volts DC when activated.

These outputs can be used to connect to lights, cameras, sirens, etc.

An electrician should be used to connect any device that runs from 240 volts AC.

Other components, such as a heavy duty relay  may be required to switch devices that draw more current than permitted by the outputs on the Base Station.

Maximum current that the relay can switch: 300mA

An auxiliary power supply may be needed to run some devices that you wish to use.

Talk to any home security company and ask them to tell you about their perimeter security products.

You’ll probably be offered a range of different sensors including:

That’s been the approach to perimeter alarms for homes from as far back as 1981 when I started as an apprentice with Guardmaster in Nunawading. (Other, expensive options have always been around for large outdoor areas for high-risk properties such as defense sites and warehouses filled with tobacco products or expensive alcohol products etc. This article deals specifically with home security)

And up until recently, they are the same detection devices I was offering our customers if they wanted perimeter protection.

It seemed to be an effective solution.

You could arm the system at night, go to bed and have peace of mind that if someone tried to get into your home, you’d be alerted by the alarm and the intruder would run off.

“So what’s the problem?”

the alarm siren is not triggered until the intruder is inside your home!

Why?  Let have a quick look at how these detection devices work

1 – The Reed Switch detects the opening of a door or window, therefore the alarm isn’t triggered until the door or window is open

2 – Glass breakage detector. It ‘listens’ for the sound of breaking glass, therefore the alarm is not triggered until the window is already broken!

3 – Vibration sensors detect the vibration caused by brute force when a window or door is kicked in.

With these traditional perimeter alarm sensors, you only become aware of a problem after the intruder is about to enter your home!

It really is a false sense of security.

Lets return to our break-in scenario …

Now, because a window or door has been opened, or smashed the alarm sirens are sounding (inside and outside) waking you  from a deep sleep.

What would your response be in that situation?

You’ve just been jolted awake by a 110 decibel siren at 3am!

Would you race out to the codepad and turn the alarm off because you don’t want to upset the neighbours?

Would you grab a weapon and walk through the house looking for an intruder?

Or perhaps you’d call the police.

The best you could hope for is that the intruder is driven away by the unwanted noise and the attention it will bring.

But fortunately, there is a better way

If someone is prowling around outside home or trying to break into your car, an early warning system offers the best defense.

When an intruder is detected you are woken by a low-level, adjustable alert tone by not ear-piercing alert tone long before the intruder is at the vulnerable doors and windows of your home.

You can turn on your lights, activate the panic alarm on your home alarm system, call a friend, neighbour or police.

The key difference is that now you have a degree of control – you won’t be taken by surprise.

Here's What The Canadian Police Feel About Perimeter Alarms:

The best alarm systems for residences are designed for perimeter protection; to prevent the intruder from entering the premises.

Systems that rely on interior protection alone present two potential problems. First, they allow the criminal to enter the home before the alarm is sounded. When there are occupants in the home, the danger is obvious. Secondly, due to the nature of the component parts of these systems, they cannot be used without limiting normal family activity within the home.

Most important, however, is the simple fact that perimeter protection emphasizes personal safety, while interior protection primarily protects property.

From a practical standpoint, however, probably the greatest degree of protection is afforded by a system that combines perimeter protection with one or more interior “sensors” that can be turned on or off independently of the perimeter devices.

Since no system is fool-proof, this procedure provides “backup” protection in the event an intruder succeeds in violating the perimeter.

In addition, it makes practical the design of a “limited” perimeter system – one that protects the most vulnerable accesses but not every means of entry through the perimeter.

Speak to an alarm expert 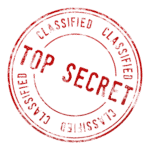